Pondicherry is a place of beauty, grace and tranquility that feels out of time, both eerie and deeply seductive

My last post not withstanding, Pondicherry (or Puducherry) is a wonderous place.

I arrived in town around mid afternoon, fresh from the 7am train from Madurai (one of the dirtiest and least friendly places I have ever visited) that was followed by a hair raising bus ride from Villupuram (most trains go here rather than Puducherry Station), where even the locals looked concerned and during which one woman berated the driver for a good ten minutes on his homicidal driving.

Thus, it must be admitted that the bar was set quite low for Pondicherry, or ‘Pondy’ as the locals lovingly refer to it. However, stepping into the heritage part of the city (“white town”, would you believe) I soon began to feel like Alice in Wonderland, or a visitor to the twilight zone. 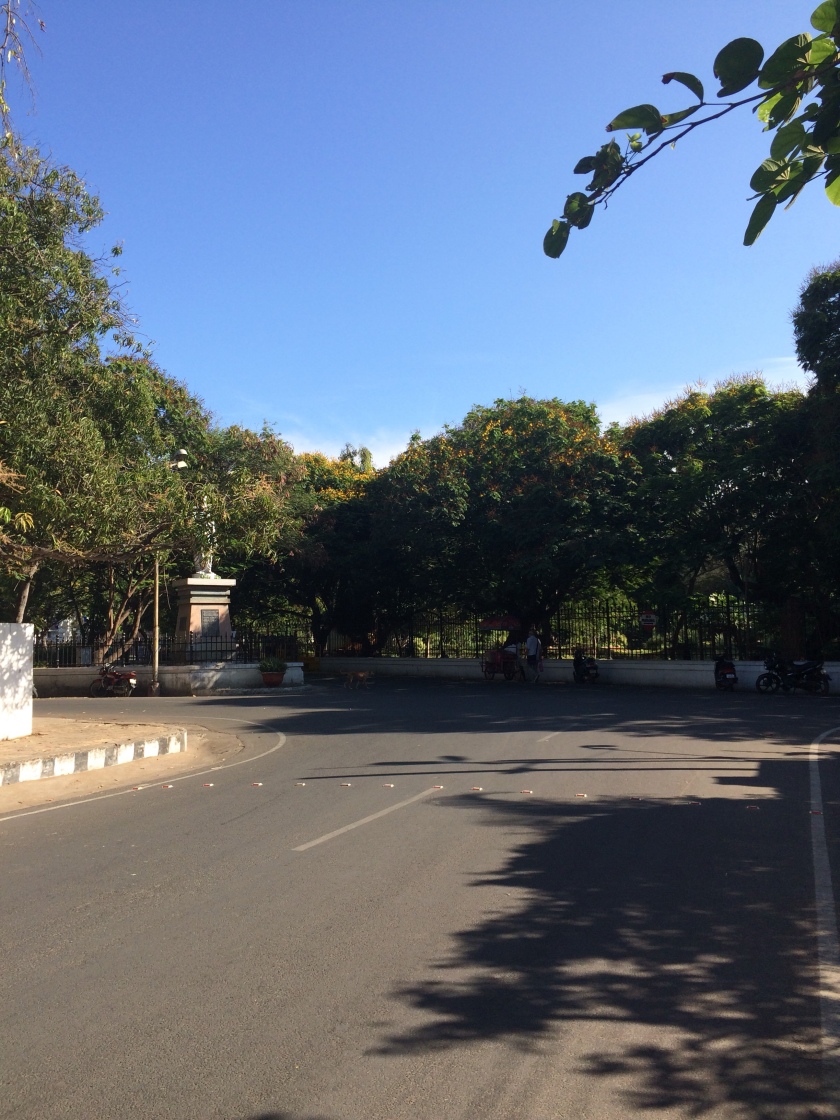 The first curiosity was the almost complete absence of trash on the streets – far from the putrid piles of stinking plastic waste that adorn every other spare inch of India, the streets of Pondicherry barely sported a scrap of litter. This was enforced/encouraged by many signs extolling the virtues of not littering such as “Pondy won’t be the same if you litter” and – my personal favourite – “Beauty is our city, preserving it is our duty”. I was – and remain – stunned. 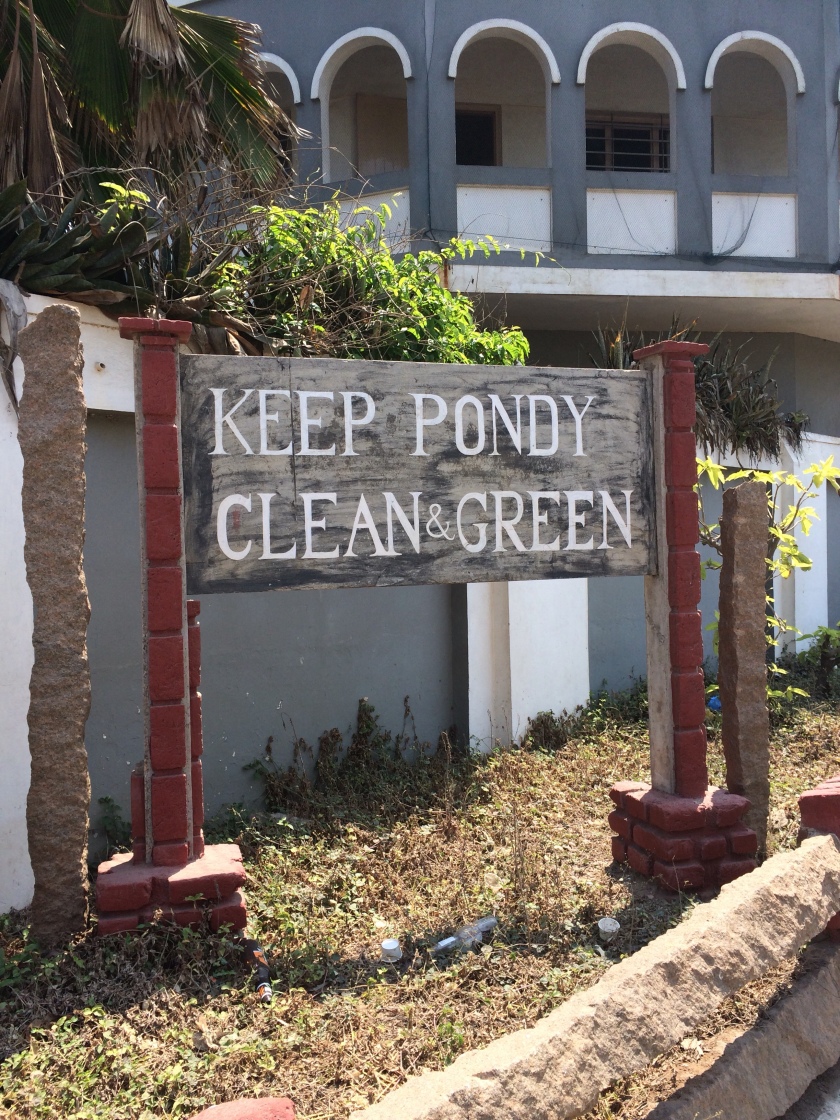 Second were the buildings; while I was aware the French had colonised Pondy, I didn’t expect that to mean much today – an assumption I perhaps based on Mumbai, which feels fully Indian despite a few grand old English buildings. However, what I found in Pondy were streets of pristine or gently fading eighteenth and nineteenth century French houses, schools, government buildings and churches; their gleaming white plaster columns supporting balconies decked in highly varnished mahogany and dripping in verdant vines and their walls painted joyful summer shades of egg yolk, rose and azure blue. 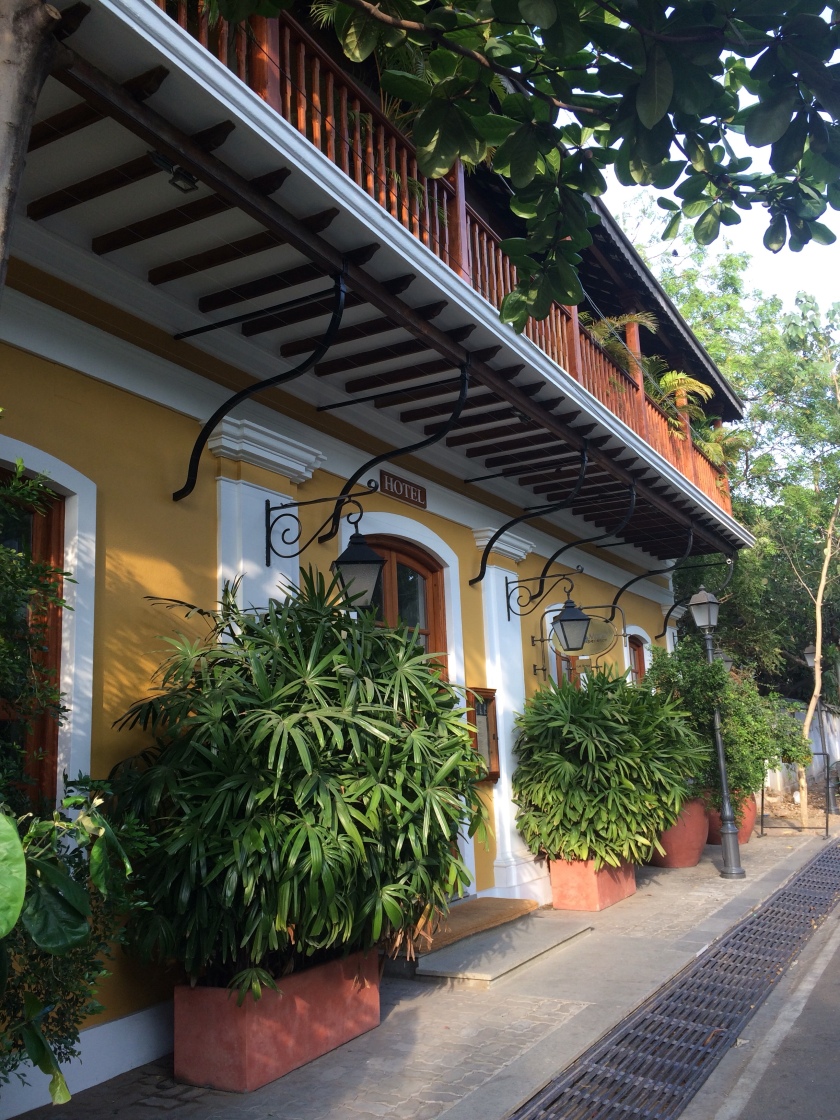 Moreover, these beautiful buildings were set into extraordinarily green and leafy boulevards, most of which led to the central Bharathi Park that is encased within ornate wrought iron gates and which itself is a magical green space bursting with fragrant foliage that provides shade for gently dozing tuk-tuk drivers and India’s ever tormented canines. At the centre of the park is a white marble monument so pristine it seemed to be radiating light for ten metres around – a gift, I later discovered, from Emperor Napoleon III commemorating the charitable endeavours of a notorious “harlot” of Hindu legend. 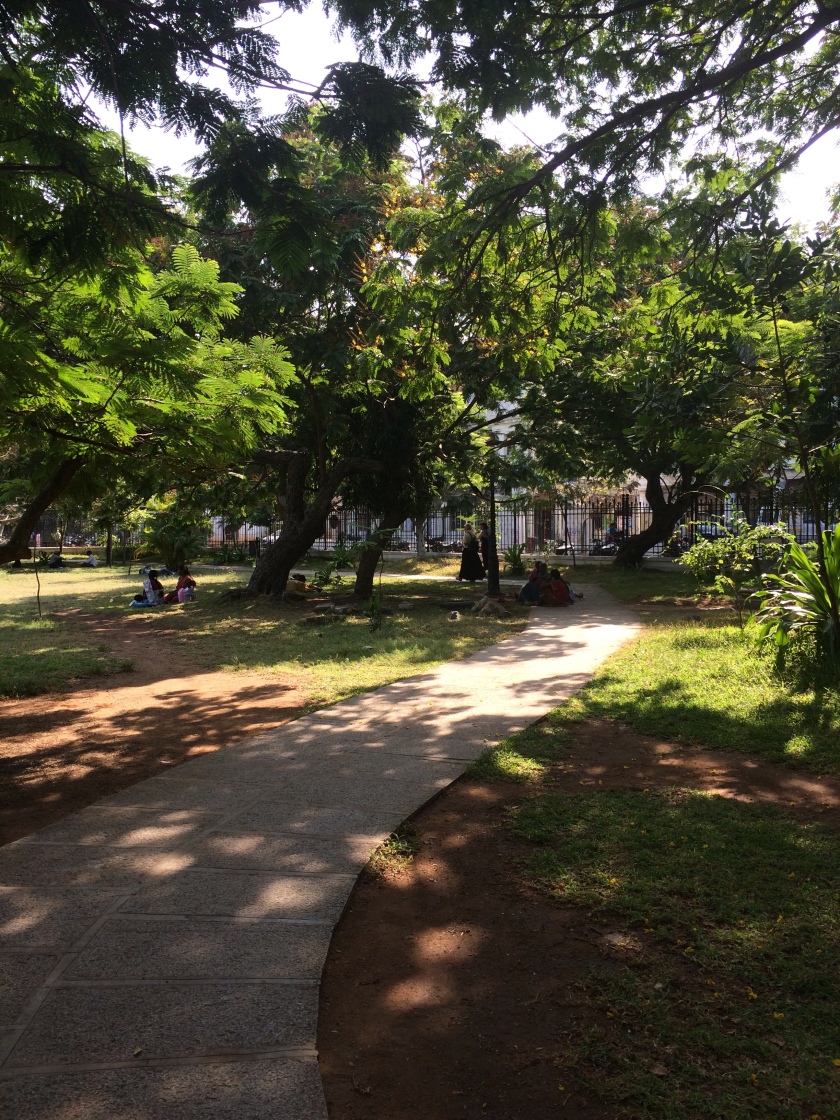 Exiting the park I then found myself facing Pondicherry’s sparkling seafront, the centre of which is marked by a glorious ten foot black marble statue of the Mahatma that – again – is remarkably pristine. The shoreline is equally spotless and was filled with Indian families basking in the late afternoon sun. Walking along the main beach road I also found a monumental garden dedicated to Bhimrao Ramji Ambedkar, the law maker responsible for drafting India’s first constitution, at the back of which is an excellent free library that anyone can enter and peruse to learn more about the thoughts and policies of modern India’s most influential politicians and law makers. Later in the evening I discovered that the entire seafront is pedestrianised after 6pm to allow for completely safe evening promenading.

Perhaps most exciting for Westerner backpackers spent on veg curry and chappati, though, are the many, MANY wonderful French cafes and eateries that Pondy has to offer. There are far too many to list, but I would highly recommend Hot Breads and Baker Street for some of the best patisserie I have EVER eaten and the Art Cafe and Artika for a late afternoon coffee. Prices are high by Indian standards but for a two day blowout – it’s just the ticket. Restaurants range from the extravagant rooftop garden Rendevous to slightly lower key L’espace, the latter of which I enjoyed a beautifully cooked and seasoned poisson du jour avec pommes frites for 300 rupees, or £3.30. I didn’t try Rendevous due to prices touching the 900 rupee mark (which of course is still incredibly cheap by European standards), but which I am reliably informed boasts succulent steaks and an excellent wine list.

Finally – the shopping. As most who know me know, I generally hate shopping, especially when bargaining is involved. However, Pondy’s many handmade silver shops convinced me to part with some cash, as did a one-off craft market by the seafront and the extraordinarily modern and fresh boutique Ma Pondy Cherie, where I picked up a t-shirt from Mumbai based street fashion designer Jas Charanjiva, showing an Indian woman in traditional dress but flourishing a full-finger golden knuckle duster engraved with ‘BOOM.’ 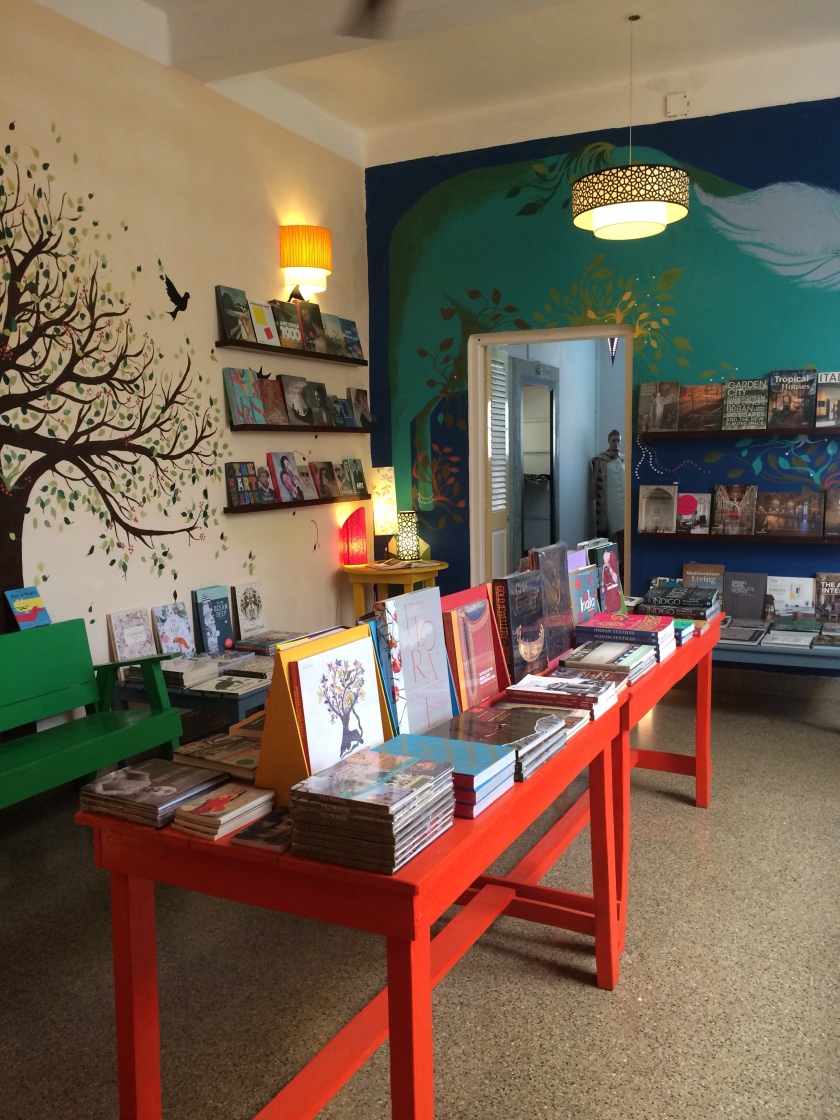 In terms of traditional Indian life, Pondy has little to offer – this is firmly an enclave for the wealthy and, more than in other Indian towns, white foreigners. I have not seen so many fashionable Europeans and glowing alabaster children idly cycling through leafy parks since Paris. There is also something a little sinister in the town’s order and cleanliness – something I have read is made possible by the fabulous wealth the Sri Aurobindo ashram generates from the thousands of spiritual seekers that visit every year from the West. As such the institution owns most of the real estate in the the town, and – I believe – is behind the strictly enforced clean street policy. Thus, while one cannot deny Pondicherry’s grace, beauty and elegance, I was left questioning exactly who gets to enjoy its peace and tranquility on a residential basis and at what cost. Nonetheless Pondicherry is a joy to visit, and a welcome respite from the glorious – but trying – chaos of mainland India. 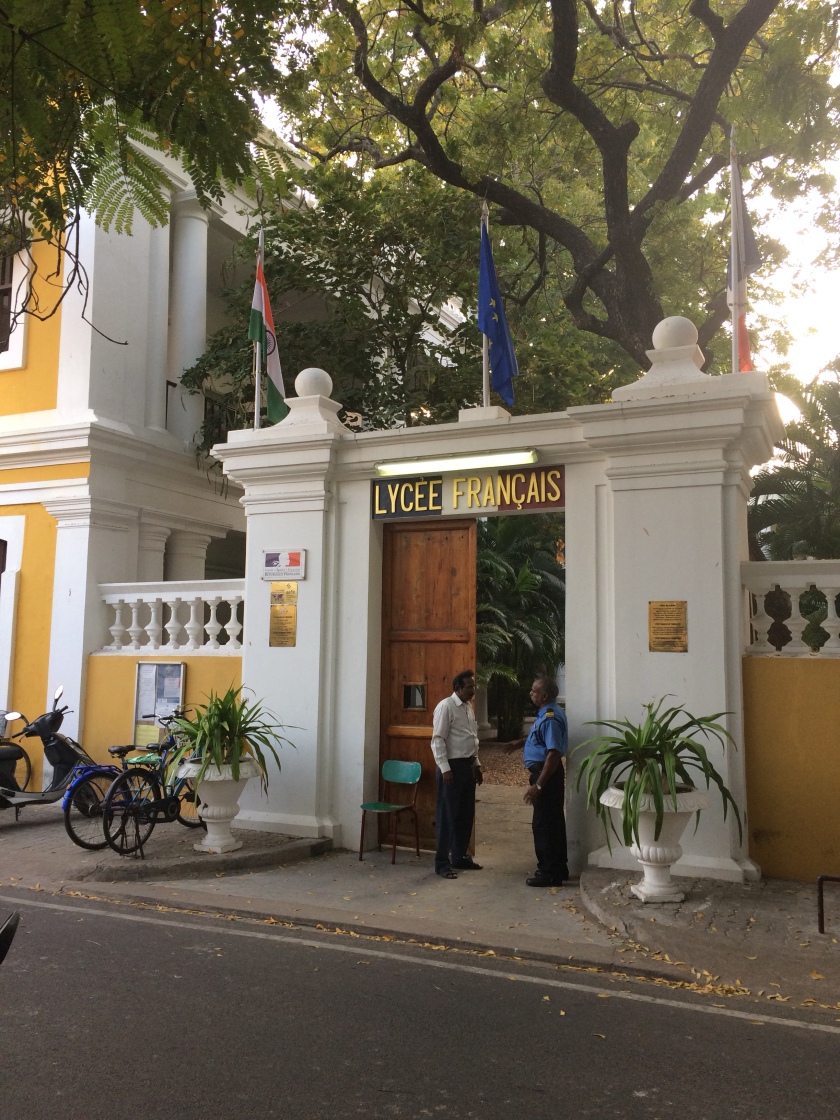