Living in Saigon, as I do, can get a little relentless and often requires a quick escape. Last weekend was mine, and I was booked to go to Phu Quoc: an island to the very south of Vietnam famed for its idyllic beaches and natural beauty.

As luck would have it, I came down with a fierce case of tonsilitis and couldn’t go. However – expecting to be bitterly disappointed – I was instead surprised to feel a quiet wave of relief wash over me. Through it, a small voice whispered: “Phew! Now you don’t have to see all the trash.”

As I was recently discussing with a French colleague, it is very difficult to convey to Europeans that have not been to Asia just how bad the global plastic pollution problem is.

At home, we are shielded from the realities of our packaging pandemic by efficient waste collection services. Here in the developing world though, these services are limited – if not entirely non-existent.

As such, with the exception of a few spots in Thailand, every single beach in every idyllic spot I have been to in Asia over the past two years has been littered with plastic trash – from bottles to food wrappers to take-away boxes to toothbrushes to car parts to fishing detritus to everything in between.

Sometimes it is lying on the shore, washed in on the tide from the Great Pacific Garbage Patch floating in between Asia and the US that is now reportedly three times the size of France. Other times, however, it is further back, sitting in half burned piles or floating in stinking, open sewage.

This is particularly the case in India, where a complex web of caste expectations is combining with a complete dearth of waste management infrastructure to turn its beaches – and indeed, the entire country – into one, big rubbish dump. It is heartbreaking to witness.

And once pristine tourist destinations such as Bali are catching up. I recently spent a month on the Indonesian island and every beach I went to, without, exception, was littered with plastic trash; as were the roads, the forests and the gutters of the rice paddies.

Tourist trash has nowhere to go

My despair reached something of an epoch in September during a trip to Atuh Beach on Nusa Penida, an island to the east of Bali, where I came to a realisation about the nature of this pollution.

Atuh Beach is a sheltered cove, reached only via a steep climb down a cliff-face. Crystal clear, temperate waters that lap gently against powder soft, glaringly white sand await those that venture down to it, and accordingly it is a top spot for eager Instagram snappers.

What those photos won’t reveal, however, is the horror that sits behind the food huts that now line the beach serving the tourists that flock to Atuh regularly. Here, piled metres high, sit mountains of plastic waste.

As I surveyed this mess, full of my usual despair, it occurred to me that – well of course –getting rubbish bins up from this beach might be an issue. Indeed, this was why (as in India) much of it had been burned, leaving small black mounds of toxic sludge scorched into the sand.

My friend and I brooded on this for a few days.

“But why doesn’t this happen in Portugal?” she asked.

“The beaches there are spectacular – no food stalls or trash in sight.”

I thought about the UK, which is similar.

“It doesn’t happen,” I answered, “because Europeans wouldn’t sit out for ten hours a day in the blazing sun selling bottles of coke and hacking at coconuts.”

I pondered. “Because they don’t need to. They’re not dirt poor. Plus there are laws against it – you can’t just throw up a stall and trash a beach in Europe.”

“This is happening because people are poor, governments allow it and tourists don’t think”

And then it dawned on me, a small lightbulb moment. This happens because people are poor and governments allow it rather than safeguarding both their citizens and their environments through laws that ease poverty and protect nature.

Add to this the thoughtlessness of tourists not used to having to face the consequences of their consumption in the developing world (a situation set to change as China stops accepting our plastic waste) and you have a Holy Trinity of Trash.

Ultimately, tourism in developing regions is creating devastating pollution through a toxic cycle of poverty, opportunism, government inaction and the ignorance and apathy of visitors. And every single tourist that buys a bottle of water on a beach is part of the problem – including me.

Journalist, nomad, cultural magpie. An inveterate Londoner, in 2016 I embarked on a year of travel through South Africa, India and South East Asia that changed the way I see the world and its inhabitants - especially myself. Here I share what I learned - and continue to learn - through my journey. View all posts by Rebecca E Jones 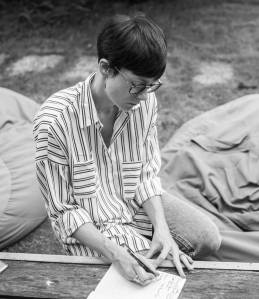